Take the FREE Sensitivity Quiz here and discover if you're a sensitive soul! 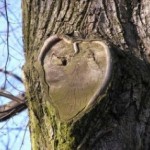 A while back I wrote several stories and I feel now is the time to share them. They are in the form of what looks like a parable. Here is the second one:

There was a girl that was living amidst the animals of the forest. She was in tune with their spirits and communicated with them as if they all spoke the same language. And they did. She played with them and learned from them. They warned her for danger coming and protected her from the wind and the rains. She learned to shield herself and live from what the forest provided. She learned to pick berries and bushes, use small ointments for cuts and wounds and provided care for those who came to her. She was in harmony with nature and felt inner bliss.

She was surprised as one day a traveler came through the forest, he was young and tall and caught her attention. As she drew a breath she could feel the excitement build within herself. He was one like her. She had never seen another being just like her, as she was abandoned as a little child by her parents. They could no longer take care for her and left her in the woods.

No one had expected her to survive, but she did. With the joint help of the animals and beings in the forest she not only survived but flourished. She had learned to take care of herself and assumed all there was was this. Her memories of an ancient past stirred a feeling of relief as she realized it had not been a dream state but others like her did exist indeed.

She approached the stranger wearily as she had learned to approach wild animals with care. She looked at him the same, not knowing what to expect but also expecting him to be able to sense her as she did him.
He was not as aware of his surroundings as she was, as he was not trained to pay attention to what was going on outside his own mind. She stepped out in the open and he was as struck by her beauty as he was repelled by her dress. She wore the skin of a wolf with a dress of bear. These were both sacred animals and anyone killing them would be considered an outlaw.

She opened her hands and he could feel a sensation around him, like a warm summer’s breeze. It felt like she was speaking to him without words. Images came to mind and he just knew what she meant. He felt her amazement and wonder, her joy and happiness, her careful approach and tension. He had not seen anyone like her before. She radiated a beauty and inner knowing, a strength and compassion, a joy and exhilaration that he had not seen a match for.

She looked as regal as a queen. The Queen of the forest. In her wake he saw animals, as her guard, moving close as she inched towards him. And he felt no threat, no fear. He felt calm and full of peace. He had no time to wonder why or how as he felt tears fall from his eyes and his heart singing “I am HOME”. He had finally come to this place where he could just be, rely on his instincts, let love overrule fear, let worry be washed away by happiness and let sorrow subdue to the excitement and joy. He finally felt at peace and just knew instinctively that she was his to ‘keep’.

I love the energy of this story and how it speaks of our search for ‘home’. The place where we can truly be ourselves.

Be mindful of what it is that you need to feel at home, what can you do or give yourself now to add to that?

Want to tap into your SWEET POWERTM?
Take the assessment to discover what helps you ​move forward, faster—and​ shine!